Looking for a new game to add to your Steam Wishlist? Then you must consider Gibbous: A Cthulhu Adventure! The trailer that dropped recently, which you can watch below, is a vibrant showcase of what this “comedy cosmic horror” game has to offer.

The story follows three protagonists: Detective Don R. Ketype, librarian Buzz Kerwan and his newly lingual feline, Kitteh. After Kitteh’s turned sentient from the ominous Necronomicon, the three set off on an adventure to return her to normal. Unbeknownst to them, an evil cult’s at work.

Gibbous is a point-and-click adventure game and, from the trailer, it’s clear that massive inspiration has been taken from classic LucasArts titles like Sam & Max and Monkey Island. First time developers Stuck in Attic bill the game as a “classically-inspired adventure game with a modern approach.”

The Transylvania-based developer exceeded their Kickstarter goal in 2016 and had originally aimed to release the game the following year. So, why’s it being released in 2019?

In a Reddit post, they explain how they went above and beyond. The first thing that caught my eye from the trailer is the fluid animation and gorgeous art style. Traditional frame-by-frame animation was utilized and it shows. Character movements and cutscenes are a real standout. Remarkably, each of the over sixty gothic environments, inspired by Transylvanian architecture, were hand-painted. This time-lapse on Gibbous’ main channel shows how much work has gone into just one background.

In addition to this, over 12,000 lines of dialogue from over seventy characters have been recorded in order to bring this quirky Lovecraft spoof to life. Oh! And Stuck in Attic also boasts a guest appearance from Doug Cockle, the voice of Geralt from The Witcher series. So, that’s a plus!

Gibbous: A Cthulhu Adventure releases on Steam and GOG on August 7 for Windows, Mac OS X and Linux. 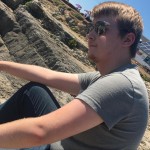 Scriptwriting student based in Dorset, England. I'm an avid fan of video games and some of my favourites are Fallout: New Vegas, The Witcher 3 and The Legend of Zelda: The Wind Waker.