Chicago; the windy city, home of the blues, and as of 2017, the home of a burgeoning development studio. Cue Paper Salamander Games, a small development studio with some very exciting prospects on the horizon. This studios first release will come in the form of an action/platformer titled In Retrospect. According to their website:

“In Retrospect is an action/platformer game where you guide yourself through a reflection of your past with a focus on player choice and music/gameplay synchronicity. Are you prepared to travel back into your memories and tell me about your life, in retrospect?”

Paper Salamander’s founder and the game’s developer, Andrew Nee, promises that In Retrospect will have in excess of 100 different platforms to play through. Each level comes with unique obstacles, hazards, and choices the player will have to make. The player can gather collectables on each platform, which will have an impact on the direction of the story. The art style pays homage to the golden days of NES, and guarantees to stir warm, fuzzy feelings of nostalgia.

Andrew Nee is a one-man army who began developing In Retrospect way back in 2013. Given that we are now rapidly approaching 2020, it is clear Nee has dedication and perseverance in spades. This bodes well for the quality of In Retrospect, as well as any future releases from Paper Salamander, so be sure to keep an eye out!

You can visit Paper Salamander Games Studio’s official website here. And read more about In Retrospect in the creators own words, here! 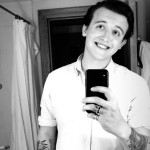 I am a writer from Great Britain, currently striving for a degree in Scriptwriting for Film & TV at Bournemouth University. I love fantasy, and adore the works of J.R.R. Tolkien, George R.R. Martin, and Neil Gaiman. Videogames such as World of Warcraft, The Elder Scrolls, Fable, etc., have been the bedrock of my childhood. If I'm not writing, then I am most definitely creating music with my band, The Strangers Club.

‘Those Who Remain’ Releases Gamescom Trailer