Preaching to the converted!

Prior to the beginning of 2022, I had not dived too deep into Indie games before. The ever-growing presence of indie titles always showing up on my Twitter feed became hard to ignore. Each time I booted up a console and checked my friends list, there were countless players putting in work with a multitude of games in the indie scene, but not me. Somewhere in my mind, the Indie game scene was one filled with half-hearted attempts to capitalize on the success of nostalgia from days past.

The idea of playing something small like that never piqued my interest, when I could always just play the original game.  Those feelings started to change once I realized that these assumptions were being made without any actual experience to back it up. Now at the end of 2022, I have been proven wrong and have found a new appreciation for independently developed games. These five games managed to capture my heart and got me to understand that there are some true gems to be found.

Bloodstained: Ritual of the night

The first title on my list is one that has been quite popular in the indie scene. Paying homage to older Castlevania games, bloodstained: Ritual of the night does a wonderful job of bringing the classic gameplay to modern times without bogging it down with unnecessary functions. As someone who was not a fan of the original formula, I found myself moving from room to room after unlocking a new feature, just trying to figure out what the next piece was. Miriam, the main protagonist of the game, is a strong character with an amazing move set that grows as she tackles the challenges that come her way.  Along with collecting skills from slain monsters, you can equip Miriam with a wide arrangement of items that boost her skills. While Miriam may not be a belmont by name, her ability to take down monstrosities of epic proportions would leave them proud. Pairing a combat system that requires you to be cautious with how you approach enemies and wonderful level design that encourages exploration, Bloodstained is a great place to start for those looking to get into the Metroidvania genre.

Axiom verge is a sci-fi adventure filled with horrifying aliens, creepy locations, and a plethora of items to help you find your way. As Trace, a scientist who is sent to an alternate world after a science experiment gone wrong, players will be challenged to navigate dark corridors and traverse tricky platforming segments as they piece together a way home.

I always wanted to try out the original Metroid series, but had a hard time handling the way levels were structured. Often I would get lost with no idea as to where to go next. This was something that often ended up ruining any fun I may have had with the series. After picking up Axiom Verge on the switch, however, I fell in love with this style of gameplay. Seeing Trace unlock new items that could be used to traverse different areas of the map was amazing. Each weapon and powerup not only boosted his effectiveness in combat, but also served as a key to unlock new areas to explore. Backtracking felt amazing, since there was always something new to be seen with each new addition to his arsenal. One of the best parts about this game is its soundtrack, since each piece is just as memorable as the last. Trace rising, one of the game’s boss themes, is a great example of how music can set the tone for a game. With its upbeat tunes, each boss fight felt like a challenge that players have been preparing for the entire game. Axiom Verge definitely worth checking out if the Metroidvania genre is something that you would love to take in more of.

This title was the highlight of 2022 for those who were waiting on a solid survival horror experience. Taking the same approach that classic titles like Silent Hill and Resident Evil, this game goes to show that sometimes less is more. With classic features like fixed camera angles and a limited inventory space, Signalis delivers a chilling story revolving around a LSTR-512, also known as Elster, as she tries to find out what caused her starship to crash on a mysterious snow-covered planet.  This game does a fantastic job of capturing that eerie feeling of being alone in unfamiliar territory. You will tackle puzzles and manage your inventory as you take down monsters on your journey to find out what happened to this space station. It has been about a month since I finished this game for the first time, and it still has been in the front of my mind. For fans looking for something to scratch the itch that classic horror games haven’t touched in a while, Signalis is a wonderful title to pick up and playthrough.

The indie scene has done a wonderful job of recapturing that aesthetic of old school jrpgs and This way madness lies does it while telling the tale of a group of magical girls tasked with saving the works of Shakespeare. Pulling inspiration from classical Jrpgs such as Final Fantasy and Phantasy Star, this game will have players assigning different skills to the characters in order to balance out a team to take on the many monsters ahead of them. Each battle is handled in a turn-based style that will feel familiar to fans of the genre, but offers its own twists to keep things fresh. One thing that really stood out during my playthrough was that status ailments were capable of impacting the boss as well. This was something that felt refreshing, since that meant I could formulate a good strategy for any encounter. With fun pop culture references and a system that translates Shakespeare’s text for a more modern audience while making the original available for comparison, This way madness lies is a fun little bite sized adventure that is worth playing through.

The legend of Zelda is a series that has helped define what adventure games look like today. The feeling of diving into dungeons to take out bad guys while also solving puzzles along the way is one that sparks joy in a lot of players. Rogue Heroes: Runs of Talos takes that same sense of adventure and layers in rouge-lite elements. You choose a starting class and embark on an adventure to tackle 4 different dungeons, with the goal of bringing peace to the land (of where). One of the interesting aspects is that players can join up to 3 other players for co-op play through each dungeon. Since each dungeon is procedurally generated, no two runs feel the same. This means you can play through solo and then run through the game again with a friend without having to worry about the experience feeling repetitive. Rogue Heroes is a blast from start to finish with an old school action-adventure RPG feel.

Overall, it has been a wonderful year for me due to the indie genre sparking some of that joy that video games can bring. With the constant new release of titles, there is always something to look forward to and surprises are around every corner. With a newfound respect for indie games and their developers, I cannot wait to see what other games are in store for us throughout these upcoming years. 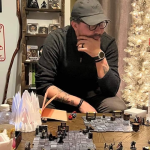